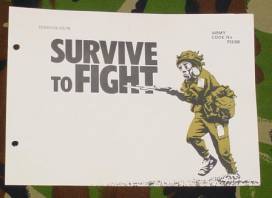 When I first started my last job, this publication was a big thing.  It detailed everything you had to do in order to survive the onslaught of the Communist hordes that would sweep through North Eastern Europe before dropping nuclear bombs on Britain to save the journey across the North Sea (I’ve done all the ferries – I can see their point).  It took us on a journey from protecting yourself, your mates, your equipment.  How to eat, drink and even go to the toilet.  What it didn’t do was explain why this situation would arise.  Maybe it was taken as read in my line of work that this was the risk took, every minute, every day.  We didn’t have a union, our rights were not enshrined in a contract and, for a large part of my career, the department I worked for had something called Crown Immunity from prosecution if something went wrong.

However, despite all of this, I survived 24 years of it without serious (work related) injury.  I never had cause to sue my employer or take industrial action over anything.  So why do I need to be in a union now?

This week has been a strange one in education.  Political parties have shifted their goals (academies were a Blair issue after all) and others have gone far beyond what they wrote in their manifestos last time around (although they never said they wouldn’t do it).  So what do we think the options are?

Well the NUT are pushing for strike action.  In my opinion this would weaken the argument – we are not junior doctors and I don’t think the teaching profession would have the support of the public (except Mumsnet who are vocal about everything – if it was their choice I wouldn’t be allowed to be a teacher now!) and all strikes do is inconvenience a lot of people and disrupt education.  I was in my GCSE years when the last big round of teacher strikes happened.  Needless to say I didn’t achieve my potential then and I don’t think it is all my fault – with the guidance of dedicated teachers I may have stuck at it then, but that is another story.

The NAS/UWT seem to want to just boo and jeer at the Secretary of State.  This also would seem to be a bizarre response to someone you actually want to engage with.  Now Twitter has been alight this afternoon over this which would lead me to believe that not all their members agree with what happened at the conference.  Whatever the response though, the fact that Nicky Morgan actually went there today says something about her (not sure what though).

So maybe the problem is there are too many unions at the moment in the education sphere, all with differing agendas.  The NUT would seem to be there for the Corbynistas, Left of Left and full of the firebrands that I associate with the TV pictures of union leaders from my youth.  Alan Peat calls for a coordinated response to the forced academies issue from all the unions but I am not sure that this will happen.  Too many self-serving people running the unions (The general secretary of the NUT had a package worth £160,000 last year – but we are all in this together people!) to join together I feel.

Is there a solution then?  Well maybe…  I’m yet to be convinced that all academies are a bad thing although I do have misgivings about MATs that don’t just support local schools, cherry-picking the schools they want.

Maybe North Tyneside Learning Trust is a good example, albeit of an LA that works at the moment.  Current rules don’t allow them to become a MAT en masse but this is something that could work.  Maybe clusters of schools could create their own MATs so that they can continue the mutual support they already give each other.  Maybe academies aren’t a bad thing in an LA that continually top-slices from the education budget and slashes posts within the LA.

What isn’t needed however is the vitriolic comments that are infesting social media today.  In an intelligent debate both sides need to sit down and talk through the issues before reaching a common solution that everyone can be (partially) happy with.  I fear this will not happen, personal attacks on individuals will keep happening and we will get nowhere.